The 20th edition of the Confederation of Indian Industry’s (CII) flagship ICT conference, CII Connect, was held in Chennai on November 26th and 27th. The theme of the conference was, “Building a sustainable deep technology ecosystem.” The event was hosted by the Tamil Nadu government and industry experts from across the globe participated via video conferencing.

Mr. Raghu kicked off the discussion with a synopsis of the deep tech ecosystem in the country. “Currently, less than 15% of our population enjoy the benefits of deep tech products and services,” he said. “This is because most of these products and services, if not all, are developed in the West. If the benefits of modern technology – including government and financial services – have to reach the other 85%, we need solutions that are made in India,” he said. Mr. Raghu then invited Mr. Daniel to speak about his experience building his startup. 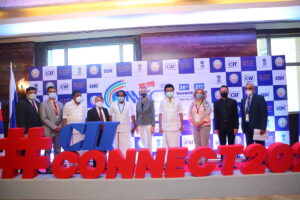 Scaling up a deep tech venture, from lab to market

“My interest in research took shape after I met Prof. Krishnan Balasubramanian, who was the Dean of Industrial Consultancy & Sponsored Research (IC&SR),” Daniel recalled. Prof. Krishnan is the Professor in-charge of GDC. “The Professor and Mr. Tarun Mishra, an IIT Madras alumni, had patented the world’s first sensor that could monitor or generate signals in metals at high temperatures. I was curious about what would be the real-life application of the technology, to which the Professor said, ‘That is for us to figure out’.”

Thus, was born Detect Technologies. The company made the world’s first sensor to detect degradations in metal pipes, which has multiple applications in the industrial world. From four co-founders – including Mr. Tarun and Mr. Daniel – the company scaled up to a 250-strong workforce over the next four years. From a lab at IIT Madras, it has expanded its presence to eight countries – completing the lab to market transformation.

Speaking about technological evolution, Mr. Lakshmi Narayanan said that we are in the early stages of deep technology. “We are in the tail end of the digital technology era – which ushered in improved productivity and new business models,” he said. “Now, new inventions in that domain are nothing but variations of old ideas. There is nothing significantly new,” he said.

Speaking about how it’s important to invest in futuristic ideas, Mr. Lakshmi Narayanan elaborated on the advancements seen in motion sensor technology. “We all know about the use of motion sensors in designing Autonomous Vehicles and Space-based Laser Systems that clear space debris. Countries like the US, however, are working on a much more advanced scale,” he said.

“For instance, multiple agencies in the US have estimated that over the next decade, it’s likely that every household in that country will have a drone or Unmanned Aerial Vehicle (UAV). To manage this traffic, and prioritize vehicular movement, NASA has been working on Unmanned Aerial Systems Traffic Management (UTM) since 2013,” he said. In fact, UTM won the NASA Government Invention of the Year award in 2020.

Speaking about the ecosystem, Ms. Roopan said the primary challenge that most deep tech companies faced in the past were that of sourcing expensive equipment and infrastructure. “Now, however, with universities and technical campuses coming forward to provide both of these inputs, most founders can follow a lean approach at least until the Proof of Concept (PoC) stage,” she said. “Concerns regarding long gestation periods of deep tech startups are now being addressed. The product development cycle has become faster. Yes, it still takes longer than regular tech companies, but the rewards are also greater. This is what has attracted Venture Capitalists to deep tech firms,” she said.