The Cohort 15 of GDC’s I-NCUBATE program ended with a grand online FINALE on 3rd July 2021, where participants shared their learnings during the program with guests including industry leaders, policymakers, academicians, and investors. The Chief Guest for the FINALE was Mr. Anil Agarwal, Additional Secretary, DPIIT, Ministry of Commerce, Government of India. Mr. Agarwal also heads the StartUpIndia initiative, which has played a stellar role in spearheading the growth of the startup ecosystem in India.

I-NCUBATE is an 8-week long bootcamp conducted by GDC for early-stage startups emanating from university labs, with a focus on building an entrepreneurial mindset amongst faculty and researchers who are seeking to commercialise their scientific research. Seven teams from four academic institutions – comprising nine faculty leads and 25 entrepreneur leads – participated in Cohort 15. The teams were working on deep technology innovations ranging from Safe Water Technology to indigenously made Smart Sensors.

Speaking at the event, R. Raghuttama Rao, CEO of GDC, explained the organization’s mission. “While a good measure of applied/transformational research happens in India, it does not come out of labs in institutions to solve real-world problems as much as it must do,” said Mr. Rao. “As a result, India relies on technology imported from the West. These technologies are not available to a large section of our society. Therefore, it is imperative for our educational institutions to step up to this challenge. That is where GDC comes in.” 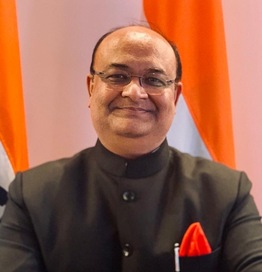 Addressing the gathering subsequently, Chief Guest of the event, Anil Agarwal, Additional Secretary, Department for Promotion of Industry and Internal Trade (DPIIT), said the Union Government, through the Startup India mission, will explore the possibilities of partnering with academic institutions to give impetus to the innovation ecosystem in the country.

Mr. Agarwal said that when the Union Government launched its Startup India mission in 2016, not many people understood the true meaning of the word start-up. “Now, in 2021, there are 58 Unicorns in India, says a recent report. Of them, 16 attained that status just this year. Startup India has recognised 50,000 start-ups since 2016, of which 10,000 came in the last 180 days. This is the innovation landscape of our country now,” said Mr. Agarwal.

He stressed on the need to define the objective of a start-up. “In plain terms, a start-up is about making money out of a technology or innovation at hand. However, in academia, we have a fundamental attitude problem. We focus only on problem-solving. The journey of an entrepreneur, in reality, begins after finding a solution to solve the problem.

“A start-up is not just an idea that you developed further in your lab. A start-up must be an incorporated company. In India today, the average age of a start-up founder is 31. The number of jobs generated per start-up is 11. Which means, close to 5.5 lakh jobs have been created in the start-up ecosystem.”

Speaking on the need for stronger academia-industry-investor relations, Mr. Agarwal said, “There is a need to bridge the gaps in that ecosystem, and GDC is doing exactly that. I would like to take this initiative to a national level. We need to think about how we can do this program in a larger way, involving more institutions, with government support, and producing quantifiable and tangible results.”

“We need to explore how we can get investments in deep-technology in India. Many entrepreneurs from India go abroad to build their companies. The main objective of Startup India mission is to provide such entrepreneurs sufficient facilities to do the same in India. In this context, we must look at ways to mobilise domestic capital.”

Mr. Agarwal then explained how the Union Government had opened the insurance and pension funds to investment in start-up companies. “These investments will provide a valuable and viable alternative to companies. As we move further towards a market economy, mindsets are gradually changing,” he said.

Thanking Mr. Agarwal for taking time to join the event, Professor Krishnan Balasubramanian, highlighted the need for greater investments in labs at national universities. “We must also create mechanisms to get the innovations made in these labs out into the market. And, what better way than to let the innovators do it themselves.”

Speaking about innovations happening at IIT Madras campus, Prof. Balasubramanian said, “Before 2010, there was hardly any entrepreneurial thought process at IIT Madras. Today, however, we believe we are nation’s leading ecosystem, with 250 deep-tech start-ups to our credit, with a market valuation over `10,000 crore. We will leave no stone unturned in making India’s start-up ecosystem the best in the world.”